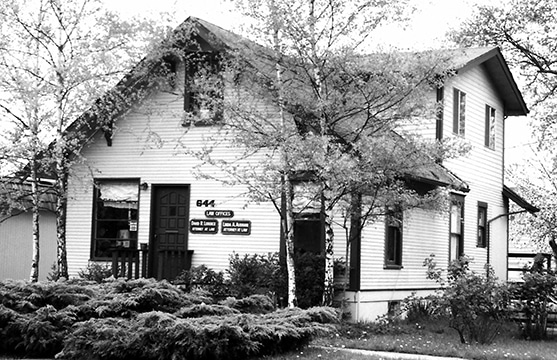 I was not present at the creation of the Co-op. It was nine years old when I first entered its door. But, as one of the early Thymes writers/editors, I interviewed many of the organizers, plus countless local business owners, farmers, Co-op personalities and community organizers. Some, sadly, are gone forever. Others continue to make this an amazing community. Their stories and accomplishments are humbling. Without them, the Co-op truly would not exist today.

As the Co-op celebrates its 50th anniversary, you’ll see stories and videos of Owners (or members, as they used to be called) who have been around much—if not all—of that time. I encourage newer Owners, especially, to take the time to read or listen. You will likely be stunned to realize how different life was when the Co-op was conceived. Even those who were around then are astonished when looking back.

It’s easy to assume the Co-op today is just a modernized version of its original self; that the store was a fully formed, completely equipped enterprise when its doors first opened. It was not. The fact that doors even opened, let alone two stores exist today is remarkable.

Snapshot of the Times

The population of Corvallis hovered around 36,000. OSU’s enrollment in 1970 was 15,470, about half of what it is today. Good Samaritan hospital was on Harrison Boulevard (since razed to build student housing.) LBCC was just establishing its main campus between Corvallis and Albany. Twenty-one grocery stores were listed in the 1970 City Directory (First Alternative not yet included). Tom McCall was Oregon’s governor.

Nationwide, political and cultural upheaval dominated the news. Richard Nixon was president; the Vietnam War divided the country; the military draft clouded young lives; soldiers were coming home with suffering from yet-to-be-named PTSD; campuses churned with sit-ins and demonstrations.  The country still mourned the assassinations of President Kennedy, Bobby Kennedy, the Rev. Dr. Martin Luther King, and others who sought change. People marched and fought for civil rights and the environment, and against poverty, hunger, corporate power and labor injustices. Cities burned during riots. Kent State, My Lai Massacre, riots at the 1968 Democratic National Convention in Chicago, Black Panthers, Student Non-violent Coordinating Committee (SNCC), Students for a Democratic Society (SDS), Black Power fists raised by athletes at the Mexico City Olympics, Woodstock, the moon landing, and the first Earth Day were among the newspaper headlines that shaped the era.

Arrests for possession of marijuana were common. Legal pot shops in future Corvallis? Products containing CBD or hemp sold at the Co-op? Get real. Harder drugs snuffed the lives of some of artists whose music provided the soundtrack to the times, including Janis Joplin, Jimi Hendrix, Jim Morrison.

Such was the tone of the times when a handful of OSU students came up with the idea of forming a food-buying club. Consumers questioned pervasive, highly processed foods that cost more, were less nutritious, and composed of unpronounceable ingredients. Farm worker activists Cesar Chavez and Dolores Huerta had drawn attention to the fields through boycotts and the United Farm Workers Union. Consumers learned about the chemicals sprayed on plants, soil, and farm workers themselves. Farm families across the country began suffering higher rates of cancer than the general population. Consumers wanted to wrest more control over their food. The students wanted to buy basic staples (grains, flour, rice, peanut butter, cheese, etc.) in bulk quantities as a group.

They somehow got their idea into the greater community and attracted others to join their effort without social media or e-mail; without home computers and printers to create fliers; without laptops to record meeting minutes or volunteer contact info, find product information and resources. The Whole Earth Catalog may have helped through its reviews of products and sources, or DIY and self-sufficiency articles. Even home answering machines didn’t exist then. Rotary dial phones were the norm. Live telephone operators assisted with long-distance or overseas calls. The idea of having a phone in your pocket or computer in your home was pure science fiction. Limitless information at your fingertips when the library was closed—on a telephone that could be carried in your pocket? Dream on. Computers took up entire rooms at universities at the time. Slide-rules and transistor radios were the transportable technology. Social media? Taking photos with your phone? Skype? Shopping online? Ludicrous.

But, they did it. Townspeople of all ages and backgrounds joined the effort. It took longer than it would with today’s technological conveniences, but it had something else going for it: face-to-face community building. Over months of research and planning, people’s strengths, talents and leadership emerged.  Of course, there were disagreements, frustrations, disappointments and steep learning curves. Human nature dogged every step. But so did honest discussion, listening to each other, investing time and sweat equity when resources were scare, and accepting the vote of the majority (aka grassroots democracy). Mistakes were inevitable, and often the best educator. Deep friendships and partnerships were formed, businesses founded. Some relationships blossomed into marriage; others dissolved.

Initially, the Co-op had no produce section, other than members bringing excess from their own gardens. That department would develop after small-farm growers started a farmers’ market and provided produce in a lean-to called Growers’ Market at what is now the South Store. (I first interviewed farmer Tom Denison for an article about that in the Thymes one afternoon at the lightly attended farmers’ market off Ninth Street in what is now the gated parking lot of just one of Samaritan Health’s complexes. Oh, the irony…)

The idea of selling meat was such anathema to some that they threatened to leave the Co-op, (but where would they go since every other grocery store carried meat?) The contentious issue filled meetings to overflowing and early votes, the first in 1986 and another in 1999, failed. In 2000, a successful vote led to more meats being raised locally and sold at the Co-op, as well as the now heavily attended farmers’ markets.

More recently, the Co-op was poised to support the local grain project when farmers needed a guaranteed market to temper the risk. When the 100-Mile Diet challenge sprouted in the mid-aughts, the Co-op just needed to add shelf labels, as it was already doing just that sort of thing in produce.

Early members were so passionate and vocal because many volunteered at least two hours a week (some much more), thus getting to know other members and the rhythms of the business. Even managers were volunteers at first. Members didn’t ask if the Co-op carried a given product, we asked if we did.

Many regret the steep reduction in volunteer opportunities, but most understand the Co-op had to change to survive. In 1999, with Board approval and after a unanimous vote of its members, First Alternative became a true cooperative. Members became Owners. Today, the Co-op thrives thanks to those who serve on its Board, Owners who vote, and great employees. And because it was, literally, built from scratch by visionaries, some of whom you still pass in its aisles.

An anniversary toast to you all who brought the Co-op to life, and those who supply, tend, and support it today. May you continue to astonish future members.

By Chris Peterson, Thymes contributor since 1984